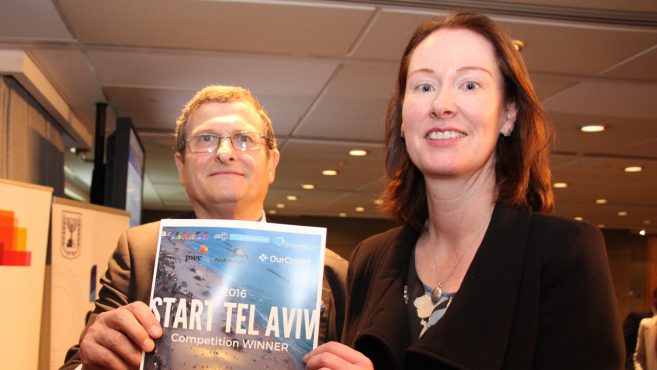 This article first appeared on StartupAUS.

In the wake of winning the Startup Tel Aviv competition, Julie Bray sits with a casual confidence, surrounded by the organised chaos of Melbourne’s York Butter Factory. It’s a reunion of sorts – Julie spent the early years of her startup, Konnective, balancing part time consulting with building her business in this co-working space.

She speaks fondly of her time here, but isn’t caught up too much in nostalgia. With Konnective now servicing globally-recognised clients in the mining, automotive and entertainment industries, she has international expansion on her mind.

Konnective is a secure broadcast platform for businesses, schools and clubs. In practical terms, it allows an organisation to push notifications out to their employees, members or stakeholders. It is received via phone, which means it transgresses the classically ignored communication methods – emails pleadingly adorned with ** IMPORTANT ** markers, crumpled school newsletters that don’t make it out of the bag and oddly-camouflaged noticeboard fliers. It’s also able to reach just about any audience, regardless of how geographically scattered it might be.

“Our clients need us to help them send that one message in the day that everyone needs to see, read and act upon.”

Obvious interviewer question number 1 – why not use a Slack group or any other social media platform?

“The people we’re working with don’t want a social network. There’s a lot of noise going on in social media networks – they’re about conversation and collaboration. This is about solving real problems that need cut-through.

“Even now people say I’m in a tough industry, a competitive environment and I say, ‘Mmhmm, OK, yep, that’s where we are. I didn’t plan to pick a competitive industry!’”

It strikes me as a very pure form of entrepreneurship – following the market where the market took her. Julie has the sort of confidence in her product born of years of prototyping, testing and refining. Her number one piece of advice to new startups – test it!

“You’ve got to validate your idea. It’s heartbreaking to get to that point and realise your idea doesn’t have legs. It’s a tough balancing act, you’ve got to have a single-minded determination that your idea is right, but you also have to validate and test it.”

That’s not to say that there won’t be changes along the way – Konnective started out as a product for schools. Her first two clients were schools that agreed to trial a prototype for free, just so Konnective could get feedback and data. That pilot led to a grant from the Victorian Government under their ICT strategy, and a roll out to 50 schools. While she has a soft spot for schools – “I love schools – it just works so well!” – she quickly found that the market among large companies was the future direction for Konnective.

“Originally we got a call from a big customer who said, ‘Can you come and talk to us about doing this in our organisation?’ At the beginning we wanted to focus on one key vertical, which was education. But we went out and talked to them and implemented it and we realised, OK, this was a vastly different scenario in terms of pricing and structure vs schools. So that’s when we really pivoted across.”

Now Konnective is primarily developed for the corporate market, but still offers a community version to schools and clubs.

A sense of community is also strong in the startup world as well, of course. Konnective’s journey passes through many community-centred initiatives. Julie cites the Startup Victoria Female Founders (SVFF) programs as critical to her early development as an entrepreneur, and she is now a member of the Springboard accelerator program.

“The SVFF run seminars on how you can get investment or how you can run your business – the community is getting stronger and growing day by day. I probably started going to more events through the female founders program.

“Springboard contributes hugely as well. There are not that many female founders that are at the same stage that you are. You go to startup events and meet various people, but the startups are in such a different position in terms of the journey, so the ability to sit in a room and meet 10 other women who are dealing with the same issues you are is fantastic.”

It’s easy to get the sense that Julie approaches the future with the same focused approach that has got her here. She is casual without being glib – she owns her words. And in this case, the next step is going international.

It’s an ambitious vision, but it’s also standing on the shoulders of the last couple of years of work. She conjures a sense of inevitability that doesn’t seem frantic.

“We know who we are targeting, we know there’s enough of them, we know it’s a global problem.  It’s taken a while to get to a point and realise we can’t be out there selling to individual customers, we’ve got to start looking at channels, we’ve got to start getting an amplification effect on the stuff we’re doing. So it’s about looking for partnerships, it’s about looking for integrations.”

I might be an easier sell than she’s used to, but her understanding across the entirety of the business paints a picture of a woman who is clear on the future of the startup.

“I like to get the pitch over with because I enjoy the questions. I’ve got to that point now where I’m pretty confident. And I’m pretty happy to say I don’t know.”

We wind down our meeting brainstorming future uses for Konnective – everything from organising media production shifts through to election campaigns – keeping everyone up to date with the talking points and latest news. I babble more than I should, given I’m trying to hear from Julie, but I get the sense that I’m not the only one in my position to do so.

“We often have conversations about this – ‘What about…!?’

“I reckon this was my key. I kept coming into meetings where people would say ‘Oh, what about…?’ and we keep coming back with an infinite number of options for how it could be used.”

Maybe she was just being kind. Or maybe I’m another point in her data set showing her product market fit. Either way – Julie sits with a polite but warm smile, calmly and patiently planning to take on the world.

Julie Bray is the CEO of Konnective. She recently won first place in the Australian leg of Start Tel Aviv 2016, a global competition from the Israeli Ministry of Foreign Affairs in which StartupAUS was a partner. Her prize: a week in Tel Aviv with all expenses paid, meeting competition winners from around the world, visiting one of the planet’s biggest innovation conferences, and touring the startup scene in Tel Aviv